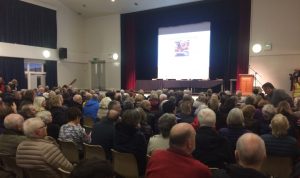 A meeting with local politicians and other decision makers to find out about developments concerning traffic in Chepstow and how plans are being implemented since the last meeting in April 2019.

View the presentation shown at the meeting below: 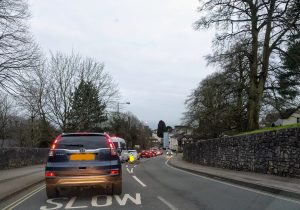 The Transport Group met on 24th November 2016. During a very fruitful meeting 4 actions were decided to focus on to reduce carbon emissions and encourage Electric Vehicle (EV) usage:

If you are interested in any of these actions, you can contact Tim at transport@transitionchepstow.org.uk or look out for the monthly meetings at the Lime Tree.

The Transport Group is looking for a new Co-ordinator! Having worked hard for several years and achieving a great deal for the group, Jen & Nik stepped down from this role in 2015 to focus on specific local projects. If you are interested in finding out more about this role, please contact Tim via transport@transitionchepstow.org.uk.

The Transport Group aims to encourage sustainable transport in and around Chepstow by providing information to people about alternative forms of transport to those that use oil and pollute the environment. It achieves this by working as a satellite group for Transition Chepstow. We meet regularly to discuss new initiatives and ongoing projects such as:

Everybody who has an interest in Sustainable Transport and a transition to a cleaner more sociable local environment is welcome to attend our meetings.

The Cafe Touring Club, (born on Friday 6th January 2012) Ladies (and gents) who like cycling out into the quiet lanes around the beautiful Wye Valley to cafes /pubs for a cup of tea (or something stronger). So far we have visited Happa Pony Centre Cafe via new cycle path to St Arvans, then back lanes to Tintern, followed by Brockweir and Hewelsfield and back along a lovely 4 miles descent to Chepstow. We cycled via Sustrans routes to Shirenewton and along to Wentwood, stopped at the wonderful Woodlands Tavern, (CTC recommended) in Llanvair Discoed for lunch then back along quiet lanes. This was a surprise venue, which is what the Cafe Touring Club members love. We cycled across the Severn Bridge via Tockington and up to Old Down Country Park where there is the amazing Old Down Manor Café complete with woodburner and settees and great food. Nice quiet lanes. Came back via Sustrans route thru Ingst and Aust, great weather, afforded good view of the Bridge.

National Bike Week Each year the Transport Group organise Rides to suit everyone starting from Chepstow aiming to leave the town on traffic free routes where possible. In 2012 NBW built on the hard work of 4 years and had a successful  week starting with Jayne Worrin’s team and some of their children from Pembroke Primary Bike Club participating in the Big Bike Fix at Bank Square Chepstow on Saturday 16th June. There we used the new tool kit and bike stand paid for by the grant funding to do basic care and repair to children’s and adults bikes. We met quite a few people interested in joining the local rides.

At the same time we asked for feedback on the Draft Edition of the long awaited Chepstow Sustainable Transport Map.

The Local Community Police Officers turned out to tag the bikes with anti theft badges.

Chepstow Review also turned out to photograph the team who carried on despite torrential rain threatening to flood the Gazebos.

For ATB enthusiasts Sarah from 559 Bikes, Manor Way, Chepstow organises rides one Tuesday evening each month from their shop venue.

For information about another Sustainable Transport Initiative, how about looking at this Transition Totnes Website: http://www.totnesonthemove.org.uk